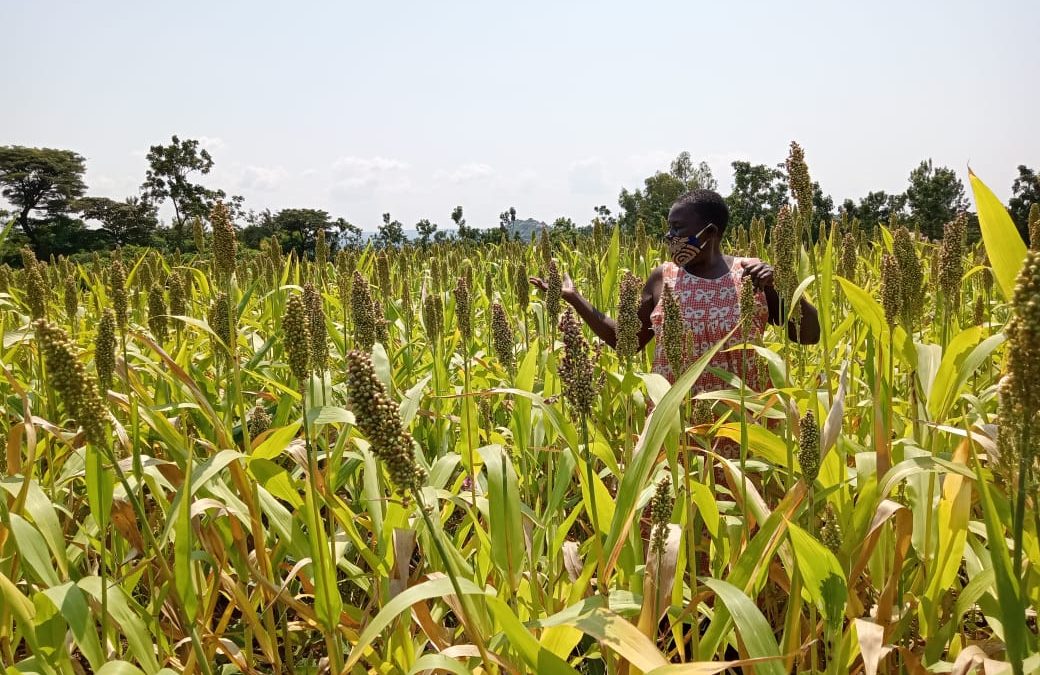 Farmers in our communities are seeing an increase in yield from their crops and are projecting earning better than before. 671 farming households have been provided with 1,342 kilograms of improved high-quality seeds of drought-tolerant sorghum seeds. More than 1,105 farmers have been trained in good agricultural practices for higher productivity, including over 671 farmers who received training on effective post-harvest handling techniques. All this, and more, has been achieved in year one of the Food Security and Environmental Management (FOSEMA) project funded by Bread for the world.

The project, which began in 2020, is now in its second year, and is using the approach of integrating food security with agriculture.

Apart from training in good practices such as mechanized threshing, safe storage using hermetically sealed storage bags, the project also reached out to 40 primary schools in the project area and established kitchen gardens with over 1,500 learners being trained on starting kitchen garden and tending to them in order to address the food security both in their respective homes and schools.

The introduction of improved variety of sorghum brought a new lease of life to the farmers who are now able to get higher yields and thereby, enhanced food security and increased income for their households. Farmers were also enabled to access quality seed unlike before when they used recycled seeds or grain purchased from the market.

One of the farmers benefited by the project is Mrs. Mary Osudhi of Ogenda Women Group, from Seme sub county, who started growing new sorghum variety when CISS introduced the variety to farmers in that area. She remarked “I started on a half acre (about 0.2 ha) because the yields were low, and I did not know much about sorghum farming. CISS brought the improved variety and trained us on how to plant on time, use proper spacing, intercropping and post-harvest handling”. She added “The new variety and good farming techniques she projects will definitely give her a bumper harvest. This has encouraged Mary to increase her acreage from half and acre to 1 and in time to she foresees herself planting on upto 5 acres.

According to Mary, more than 300 Seme farmers from the 4 wards that is North, Central, West and East wards took training on seed preparation, planting on time, good agronomic practices and post-harvest management.  The farmers are a happier lot after them projecting they are going to harvest two to three times of their previous harvest that have in the past come from the local varieties.

When Mr. Jared Onyango and Mrs. Anne Otieno, CISS, visited the farmers in the four wards, they were especially impressed by Mary’s dedication on improving food security in her household in order to support entire livelihoods.

In the last phase of the project, farmers like Mary will be trained as TOTs to train others on agriculture to ensure they are food secure in their households and communities at large.

The project trained both women and youth groups on value addition where they can come up with different types of recipes such as chapatis, mandazi (Kenyan doughnut).

Funder: Bread for the World